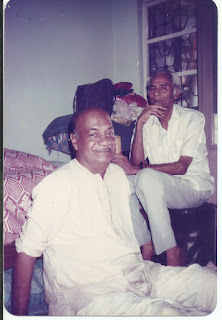 Above- LSRajagopal with RGK. Below: With Writer and Mrs. Lakshmi Gopalakrishnan 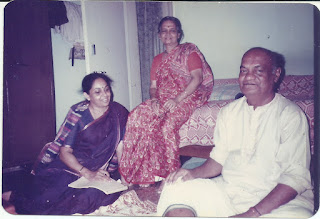 RGK aka R. Gopalakrishnan aka R. G. Krishna (the illustrious writer and assistant Editor from the stable of Times of India) invited me to meet his friend L.S. Rajagopalan. We had a wonderfully nostalgic afternoon when the two veterans exchanged memories about music, dancers and musicians.  LSR was an amiable conversationalist and shared some personal incidents about his life.
LSR was born in 1922 at Konnangulam near Guruvayur. He was a student of St. Xavier’s college in Mumbai where eminent journalist M.V. Kamath was a classmate. After graduating in Chemistry, he procured a job in Kemp & Co. as a chemist. Kamath was employed elsewhere and as soon as a vacancy occurred in Kemp & Co, LSR called his friend over to work at a salary of thirty rupees.
The earliest contact with music was when he heard a classical music concert on the radio. While his sister learned the violin, he opted for the flute, which cost the least and required no maintenance. Vishnu Prasad Shirali who played jalatarangam inspired him, so he searched for a teacher who can teach him that instrument.  Another event which inspired him was Uday Shankar’s performance at the Capitol (Mumbai) when he witnessed the dance-drama Man & Machine. with a one-rupee ticket.
Someone suggested Manohar Barve, a musician who conducted classes at Dadar. When Barve heard he was from Trichur, the first question he asked was , “ How is the King Cobra in the Trichur Zoo? When I went there for a performance I visited the zoo. The head master of Sarkar High School was my host.”
“My father is the headmaster.  You stayed at my house.”, replied an astonished LSR.
Barve could play a hundred instruments and is known to play the violin held behind his back. LSR learnt Tilak Kamod on the flute after unsuccessfully trying out the whimsical jalatarangam. One day, the instructor did not turn up but a young man sitting in his place said he has been deputised to teach that day. After the class, they made their way home together. Their conversation ran something like this:
I didn’t get your name.
Marathe.
Not Ram Marathe, is it? Ha, ha.
Yes, Ram Marathe.
Not Ram Marathe the singer, actor?
Yes, the same.
LSR describes this moment as thrilling and kept him on a high all his life to think he has been learning from Ram Marathe. He continued learning music and explored Carnatic music. He has a letter from Tiger Varadachari who advised him that the best way to learn Carnatic music is to learn as many varnams as you can.
In 1944, he returned to Thrissur and began a pharmaceutical industry making medicines for rheumatism and filaria.
In 1950, LSR witnessed Koodiyattam for the first time. He remembered a verse from the Tamil epic Silapaddikaram: “His red eyes set forth a thousand ideas.” The red eyes are caused by a seed inserted in the eye to enhance Netra-Abhinaya. After considerable research in Koodiyattam and folk arts, he was considered a scholar who was a mentor for students. LSR was equally highly impressed by the folk and tribal artists who had fine voices perfectly aligned to sruti.
Folk arts need a platform and be accorded a status, he says. “Money can come later. Otherwise we may lose these arts.”

He was fascinated by the music of the Chakyars accompanying the dance. He began to analyse the performances for the swaras (notes) and their arrangement. In 1973, he gave a lecture demonstration on Kudiyattam at the Madras Music Academy with Mani Madhava Chakyar. This gave instant recognition to the art which was till then confined to Kerala.
He is the author of two books on Kudiyattam. His keen interest in Kathakali led him to experimental production of a Kathakali play based on Arunachala Kavi’s Rama Natakam in Tamil.
As a scholar who promoted not only the classical arts but also tribal arts and folk music, he devoted his efforts on his own steam and because of his passion for them.
At the time, I met LSR, I had not witnessed any Koodiyattam recital. When I was in Irinjalakuda in 2001 for a two-month Netra Abhinaya residential workshop, I visited LSR at his home.


Performing artistes of Indian classical and folk art forms were bereaved as L.S. Rajagopal, an eminent scholar and researcher, passed away in Thrissur in 2008 at the age of 86.
Posted by Indumati Raman at 22:12 No comments: