Bhagavata mela in Kalakshetra
This article is a homage to our dear Peria Sarada teacher. The later generations of students were not fortunate to know her, or the many names mentioned here, but they should remember that they formed the backbone of Kalakshetra and its famous dance -dramas.
The connection between Kalakshetra and Bhagavata Mela is brought to light by S. Sarada Teacher, in her book, ‘Kalakshetra-Rukmini Devi’ (1985) 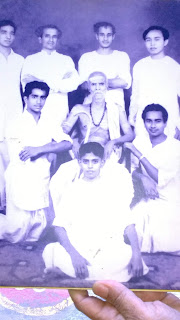 S. Sarada Teacher or Peria Sarada as she was known was the backbone of Kalakshetra dance-dramas all her active life. Fascinated by Rukmini Devi’s beauty, talent, and vision from the first day she witnessed her historic public performance in 1935, she felt drawn towards those ideals. In her book ‘Kalakshetra-Rukmini Devi’ published in 1985, Sarada teacher gives us a fairly detailed account of the genesis of the dance-dramas from bud to bloom. This is a valuable book as it gives us a ring-side view to the work development of the dance-dramas. Peria Sarada was so dear to all of us and so accessible. She never wore her erudition, seniority, and importance like a chip on her shoulder. She remained modest and unassuming all her life.
I was a frequent visitor to Chennai for the December season for in the 80’s. On every visit I would make it a point to meet G. Sundari teacher and Sarada teacher at the Theosophical Society, Adyar. In 1985, she presented this book to me, with her own signature, making it an invaluable possession.


She graciously agreed to come for my performance of ‘Sumathi Tyagaraja’ at the Rasika Ranjani Sabha at Mylapore and presided as Chairperson in the panel over my Bhagavata Mela lec-dem and presentation at the Krishna Gana Sabha NatyaKala Conference and the Bhagavata Mela  performance at Sri Kabaliswar temple in 1994. Others on the panel were Sri.V.P. Dhananjayan (Convenor of the Conference) and Dr. Arudra. 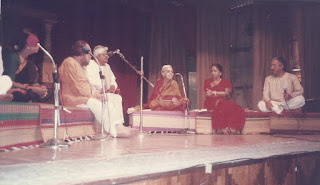 Natyakala conference 1994 with Dr. Arudra, Sarada teacher, Me and Dhananjayan .Panel discussion after my lec-dem with Bhagavata Mela Artistes.

this book, Sarada teacher has explained how Bhagavata Mela came to Kalakshetra.
In those days when Bhagavata mela was unknown and buried in the deep interiors of Thanjavur, scholars like Mohan Khokar, Dr. V. Raghavan and E. Krishna Iyer wrote about it in newspapers. Sarada came across an article by Mohan Khokar which mentioned the dancer-musician Natesa Iyer, who was 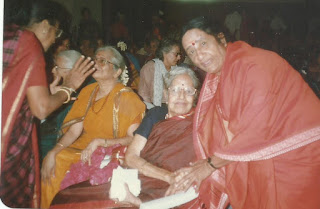 
known for his attempts to revive Bhagavata Mela. She knew both his daughters, Kunjamma and

Kalyani who were childhood friends. She got in touch with the latter and broached the subject of

notebooks which had Prahlada Charitram, Usha Parinayam and Markandeya Charitram. As these

were Grantha script, Venkatrama Sastri, the Telugu Pandit of the Adyar Library wrote them down in

Sanskrit for use at Kalakshetra. Kalyani ammal then taught the Kalakshetra musicians the songs of

E.Krishna Iyer, a dancer and revivalist himself, was instrumental in introducing Rukmini Devi to Sadir and Bhagavata Mela. He suggested that Balu Bhagavatar of Melattur be invited to stay at Kalakshetra and help with the production. He came with his sister, who was his caretaker, and resided on the campus for several months.

Bhagavathar explained that Prahlada Charitram was a sacred natakam and many are rituals associated with it. It was to be performed in a purified environment by hereditary Bhagavatars. The Narasimha mask was worshipped in the temple and cannot be taken out. So, Usha Parinayam was selected.
Balu Bhagavatar and Kalyani Ammal taught them many theermanams from these natakams. “Balu Bhagavatar also taught the traditional method of using the movements, dance-patterns, characterisation”

Pandit Venkatachala Sastri, and Vidwan Thuraiyur Rajagopala Sarma helped in editing of the natakams. In 1970, all these stalwarts were an unforgettable part of our lives.
While composing of Usha Parinayam had begun, Rukmini Devi wanted to compose a short one hour drama and selected Rukmangada  Charitram. The Melattur Guru and Kalyani Ammal “were happy to see this Kalakshetra production, because it brought out the excellences of this type of dance-dramas.”
S.Sarada explains, “ Though Rukmini Devi followed the Bhagavatamela tradition basically in style and pattern when presenting Usha Parinayam…she completely modified the stage presentation., the scenes and the movements and positions of the various characters.”
In 1964, Rukmini Kalyanam was composed and presented. Kalyani Ammal gave the manuscripts and taught the songs. In 1966 when I joined Kalakshetra, the production was on in full speed. Although a fresh student, I was selected for the group dance of the Krishna Sabdam. I distinctly remember Balu Bhagavatar sitting outside the then Kathakali Cottage (opposite the Banyan tree) or watching us during class.
In 1971, the government sponsored the production of Dhruva Charitram to be produced in consultation with Balu Bhagavatar. At this time, Harishchandra was also selected but was found to be too long and as Rukmini Devi reacted by saying ‘it is too distressing to see the burning ghat scene, and the terrible suffering of the king and his wife.’ Dhruva Charitram was performed using the traditional aspects of Bhagavata Mela natakams like Konangi, Ganesha Patra Pravesham and Patra Pravesham of the major characters. Sarada Hoffman (Chinna Sarada) assisted Bhagavatar in the dance compositions.
For more information on Bhagavata Mela, its history, natakams and much more do read my book ‘Bhagavata Mela, My Tryst with Tradition’ published in January this year.

Posted by Indumati Raman at 01:45 No comments:

Here is a review of my book Bhagavata Mela My Tryst with Tradition which was published in Samudhra a magazine dedicated to Music, Dance, Drama and Art Cinema. The review is written by the erudite  Dr. Smt. Radha Bhaskar a musician, musicologist and convenor of many events in Chennai. Shri Mudra Bhaskar is a multi faceted personality both Mridangam artiste and Master printer. Thank you so much Samudhra. 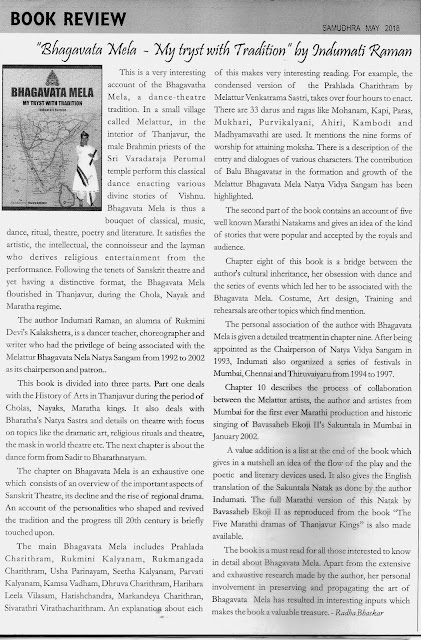 Posted by Indumati Raman at 23:01 No comments: 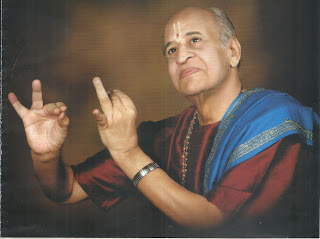 In 1966, I joined Kalakshetra after completing a gruelling five-year course under Smt. Uma Devi, an alumna of Kalakshetra. After my arangetram, my teacher insisted that I join Kalakshetra for further training.  Training under her, learning the time-honoured items like the taxing Varnam and Thillana was so perfect that I could perform with my cousin without a rehearsal. When I joined, my initial few months was spent in polishing the posture and the adavus. I became aware of the finer points of eye movements, nuances and delicate flourishes of the wrist and shoulder, and the all important araimandi. I would get back to the ‘mirror’ cottage every afternoon and practice my adavus every day, without rest after lunch break. One afternoon, Kittu Anna as he was fondly addressed, came in wielding his thattukazhi threateningly, or so I thought. From that day for several months he took my class, one to one, encouraging me, explaining the importance of practicing three speeds and so on. His favourite word was ‘inhibition’. He immediately understood that I was timid and anxious to make the grade. He would repeat emphatically, do not have any inhibitions, be bold, you are working so hard, all will end well. I owe so much to Kittu Anna for his kindness, encouragement and the time he gave me.
Professor M. R. Krishnamurthy joined Kalakshetra when he was sixteen years of age with a three-year Government Scholarship under his arm.  Blessed with an impressive personality, he dedicated himself to dance and was trained under Rukmini Devi. He was fortunate to get his foundation for Bharata Natyam, under great teachers like Sarada Hoffman, Smt. Vasantha Vedam, Smt. Jayalakshmi, Pushpa Shankar and Mylapore Gowri Ammal. He learnt Kathakali under the legendary Chandu Panikker Asan. Bhagavata mela Guru Balu Bhagavatar was resident in the campus and trained students like Krishnamurthy, Janardanan, Dhananjayan and Shankar Hombal.
He played major roles in the famous Kalakshetra dance-dramas. As Jatayu, Vibheeshana, and Sugriva in the Ramayana series, Brahmana in Rukmini Kalyanam and Shakuntala are some that come to mind immediately.
Born in 1936, his dance career continued to bloom after he left the institution to establish his own in Bengaluru. ‘Kalakshithi’ is his homage to his Guru Rukmini Devi. He dedicatedly follows all the tenets and values he had imbibed at Kalakshetra. He never wavered from the Kalakshetra Bani and continued to uphold the strict adherence to the technical perfection ingrained in him for decades. He demands the same discipline and perfection from his students. His sister Rukma Narain is the pillar of support for his career and is the backbone of Kalakshithi. The school campus is artistically designed by her and has a beautiful theatre space designed by her. The classy stamp of beauty and refined taste in the décor is evident everywhere.

The school recently celebrated 25 years and a few contemporary artistes and colleagues were honoured on this occasion.
He has presented his students in various platforms. His choreographic presentations in classic themes like Pancha Kanya, Rasa Vilasa, Gokula Nirgamana, and Akka Mahadevi.
He has been honoured with prestigious awards: Chandana Puraskara (2014), Attendance Rukmini Devi Award (2012), Natya Tapasvi (2001, Karnataka Kalashri(1998) 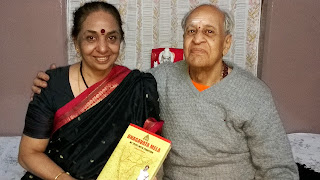 I met Kittu Anna this year (February 2018) to gift my book Bhagavata Mela My Tryst with Tradition. It was an emotional and nostalgic meeting. My heart was overflowing with gratitude to have trained under such a wonderful teacher.

Posted by Indumati Raman at 10:21 No comments: