This article is a tribute to the maestro was written by me and first appeared in SRUTI issue 99/100 Winter Bumper Issue. 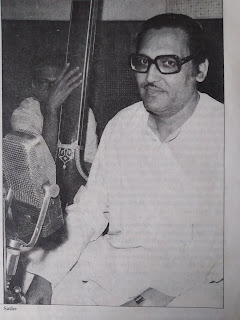 On a warm Sunday morning in May, an exclusive gathering of musicians, music lovers and friends gathered to felicitate Pandit Sharad Sathe, a senior musician of the Gwalior gharana, on his 60th birthday. The invitees were regaled by Sathe and his wife Sunetra with three hours of and more of classy music. The only interruption was a brief interlude to accommodate a touching two-minute tribute paid by their daughter Smita Mahajan and a word of thanks for the distinguished audience.
The music that morning reflected the sophistication, grace and emotional overtones of the Gwalior gharana. Sunetra Sathe opened the sessionwith a forceful rendering of compositions in Jaunpuri and alaiya Bilawal. She had been on a self-imposed exile from the public stage for 12 years, but her music revealed her thorough grounding and involvement in the art.

Pandit Sathe’s recital was in the nature of a heartfelt offering of gratitude to his gurus. He seemed inspired by the presence of the octogenarian Pandit Sharadchandra Arolkar with whom he has maintained a constructive relationship for the past 26 years. The Todi which flowed from him was a brilliant display of grandeur and aesthetics. The musical grammar was correct, there was also emotion, or bhava. The quality of an inner harmony which gives richness and dimension to his music was also evident. He rendered a tappa with great felicity and concluded his recital with a tarana and a composition in Bhairavi.

The event helped recall how music brought Sharad Sathe and Sunetra together and has remained a binding force in their family.

Born in 1932 in Pune, Sathe was encouraged by his sister Kamala Ketkar, a musicologist, to learn under her guru, the young Dattatreya V. Paluskar. The gifted son of D.V. Paluskar is credited with simplifying the highly complex Gwalior gayaki and endowing it with ‘a depth of perception and a rich emotive quality’.  Sathe was in his teens when he began receiving instructions under Paluskar. As one of the more promising students, he enjoyed the privilege of travelling and performing with his master. “Over seven years, I had the opportunity to learn concert planning, for my guru could gauge the audience and give them exactly what they wanted,” says Sathe in admiration. And adds: “I remember an Independence Day concert in Indore in 1953. In the morning, Panditji had high fever. D.K. Datar, who was to accompany him on the violin, and I had taken for granted that the concert would be cancelled. But in the evening, my guruji asked to be helped onto to the stage and gave an unblemished recital, his spirit was admirable. In 1954, at a conference in Motihari (Bihar), he was scheduled to sing last. His turn came at three o’ clock in the morning. The audience was tired and listless.  Guruji began with a drut khayal in Lalit, an early morning raga. The audience responded with such renewed energy and sheer joy that it seemed that it seemed like a miracle.

The sense of bereavement at the tragic death of his youthful master still lingers in Sathe’s voice as he remembers the events leading to Paluskar’s sudden end. Paluskar had just returned from a tour China in 1955 as a part of a Government cultural delegation. On Vijayadasami day, he developed high fever, diagnosed as encephalitis, and collapsed within 24 hours.

Sharad Sathe was only 23 at that time and had graduated in science. His quest for another guru brought him to Bombay in 1956. He continued his musical training under Professor B. R. Deodhar, who passed away in March 1990. He was also a disciple of Vishnu Digamber Paluskar.
Venerated as a teacher and musicologist, he had done intensive study of voice culture under Dr. Douglas Stanley and Professor Hilas Engum. He was as well a prolific, scholarly writer of several books on music and musicians. He was, too, the founder of the Deodhar School of Music in Bombay.
In 1966, Sathe came under the spell of Pandit Sharadchandra Arolkar, who is today the revered doyen of the Gwalior gharana. Under Arolkar’s tutelage, Sathe blossomed into a mature musician acquiring polish and emotional depth. Notably, Arolkar has also bequeathed a veritable treasure house of rare and original compositions to Sathe.

Sathe has participated in many major musical events in India. His concerts have won critical acclaim, especially his majestic command over gamaka, meend and fast taan-s. He is one of the few exponents of the tappa, a song-form with a complicated structure. He is a guest lecturer at the Bombay University on the tappa compositions.

He has given concerts abroad too. In 1985 he performed extensively n the U. S. He served the London Kendra at Bharatiya Vidya Bhavan as a resident lecturer for one year in 1986-87, and followed it up with a concert tour in 1988.

Sharad Sathe was until some years ago working in a creative capacity in an advertising agency. A specialist in calligraphy, he now freelances in creative designing.
A regular performing artist for AIR and Doordarshan, Sathe was awarded a Government of India scholarship in his younger days. In 1972, the Films Division invited him to lend his voice for a documentary on Vishnu Digamber Paluskar.

Sunetra studied music with Govindrao Desai, also of the Gwalior tradition. She has an interesting story to tell about her first meeting with Sharad Sathe. “The first time I saw him was at his concert. Half-way through the concert I just walked away, unable to enjoy the music!” Quips Sathe, cutting in: “Perhaps you were overwhelmed by my personality!” Sunetra gave up performing when the family responsibilities grew. Although she took up teaching science and mathematics in a school, she never gave up music.

Married in 1958, the Sathes have a daughter, Smita (dancer and vocalist) and a son Samir.

Sathe comes across as an enlightened musician who has been able successfully to bled traditional learning with a studied modern approach to life and music. On stage and off it, he projects sense of harmony and also conveys a shrewd inner determination which has stood him in good stead throughout his career of 40-plus years.
Says he; “Music has been the mainstay of my life. I am indeed very fortunate in my guru-s and I am content with the course my career has taken. I am not one to take recourse to gimmicks or pursue publicity. I believe that the satisfaction that good music can give, cannot be matched by anything in the world. These are the values I have been taught by my guru-s and this I have tried to impart to my children and students.”
INDU RAMAN

Posted by Indumati Raman at 21:57 No comments: