This is a review of Raghunath Manet’s dance performance which I covered when I was the Bombay arts critic of The Hindu (Madras Edition) for many years. It was published in The Friday Review of dated November 7, 1997. I had met him backstage then and as we are both from Kalakshetra, we had an interesting chat.
It was wonderful to meet him after twenty years, last December (2018) as delegates to the CID International Conference. He mentioned that he has performed only once in Mumbai. He regretted that he was never invited again. When I reminded him that I had reviewed his performance for The Hindu, he was surprised.
Raghunath’s performance at the conference was hailed for the energy and fury he unleashed in the Rudra Tandavam.
For his lecture, Raghunath spoke about the Devadasis of Puducherry. He dismissed the strict discipline of araimandi or demi plie stance of half-sitting in Bharata Natyam. I pulled him up privately for that comment later when he video-recorded a chat with me. I have always felt that dancers must learn about the importance of maintaining correct form and line of the body while dancing.
Raghunath is also a Veena player and lives in France and Puducherry and has been conferred many awards including the Pravasi Bharatiya Samman in 2017. 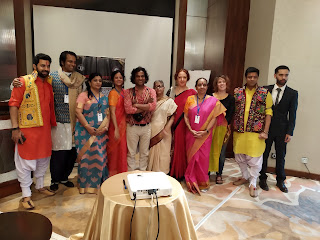 Group of Delegates at the CID Conference 2018 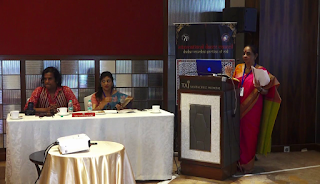 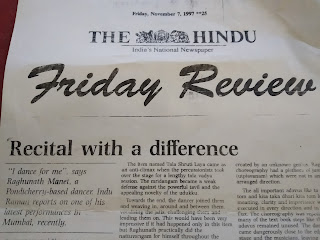 RECITAL WITH A DIFFERENCE -Raghunath Manet

“I dance for me”, says Raghunath Manet, a Pondicherry -based dancer. Indu Raman reports on one of his latest performances in Mumbai recently.

It was an unusual Bharata Natyam performance by any standard. Titled “Shiva Tandavam”, it was performed by Raghunath Manet, Pondicherry-based dancer. The programme sheet did not disclose what was in store because it contained only the names of items without mentioning the composition, raga or tala. The curtain opened on a simple stage décor with a yellow silk drape, a large veena on the right and a few flowers scattered artistically on the foreground.
An artist dressed in finery and a turban made an entry playing an udukku while singing. Then a lady nattuvannar, a kanjira player and Venugopal, the main vocalist walked in and sang before they sat down. Then the dancer made an impressive appearance with Pushpanjali and Alarippu (Tisra). After a long raga interlude by the singer, Raghunath came and sat down in front of the veena. The next 15 minutes there was a brilliant exposition of Ghana Raga Panchagam Taanam played by the dancer. This was followed by the Tevaram Ponnar Meniyane and Ananda Tandavam Adinar danced with an explosion of energy that infused the adavus with ecstatic expression of passionate devotion to Nataraja, the Cosmic Dancer. With his finely tuned body, keen grasp of melody and rhythm and masterly control of his limbs, Raghunath conveyed his total emotional involvement effectively.
The item named Tala Shruti Laya came as an anti-climax when the percussionist took over the stage for a lengthy tala vadya session. The mridangam became a weak defense against the powerful tavil and the appealing novelty of the udukku.

Towards the end the dancer joined them and weaving in, around and between them, vocalising the jatis, challenging them and leading them on.

This would have been very impressive if it had happened only in this item, but Raghunath practically did the nattuvangam for himself throughout the evening. To the rasikas, it was not only a distraction, but also exposed the lack of coordination and preparation. The general unease during this item was also because the nattuvannar’s cymbals were strangely silent throughout. The tuning of the three different percussion instruments did not converge on an acceptable note either, thus emphasising the lack of a comforting and controlling agent like a tanpura.

The performance ended with a tillana (Behag). The Shiva motif lingered like a unifying thread even during the pure dance sequences (thirmanams). Raghunath Manet’s training under Kalakshetra discipline was evident in his sparkling footwork, strong bodyline (angashuddham) and consistent adherence to the basic posture (araimandi and natyarambham) A musician with a thorough knowledge of the intricacies of uniting dance with music, he is indeed a compleat artiste. It seems necessary to point out , however, that the dancer’s preoccupation seemed maximum utilisation of the space and to this end his compositions had a surfeit of circumbulatory overtures. This destroyed the grandiose structure and architechtonics of Bharata Natyam technique.

The Alarippu, for instance, has defied the challenges of time and modern innovation and till today remains a model work. Its linear beauty, the gradual ascensions of tempo and attitudes that bespeak of devotion makes it an unparalleled item created by an unknown genius. Raghunath’s choreography had a plethora of jumps (utplavanams) which were not in any prearranged direction. The all-important adavus like ta din kina tom and kita thaka dari kita tom lost their meaning, clarity and importance when executed in every direction and in constant flux. The choreography was repetitive and many of the textbook steps like mandi adavus remained unused. The dancer also came dangerously close to the edge of the stage and the musicians, leaving the sensitive viewer nervously anticipating a slip.

Born in Pondicherry, Raghunath was initially trained by M.S. Nathan, a local dance teacher. He joined Kalakshetra to continue dance and learnt veena from the renowned veena Vidushi Rajeswari Padmanabhan. Growing up in Paris amidst the artistic fraternity expanded his horizon and spurred him into his career.

He worked with Chandralekha for four years before he set off on his own. Raghunath is now based in Pondicherry where he runs a dance school for orphans and disabled children. It was touching to know that dance helped these children to open up their minds and become more confident by merely learning how to improve their posture and stand erect.

Raghunath has this to say about his unusual packaging of the evening which smacks of suspiciously of being put together for a foreign audience. “I would do the same for any audience here or abroad. At this stage in my career, I have a right to choose what I perform. I never really choreograph my items. I don’t like them to be labelled as such. My dance will reflect what I feel, my spirit and the response I get from the audience. I sing, I say the jatis, speak to the audience and play the veena. In fact, I never use nattuvangam in my dance. I am in charge. So I control the accompanists too. I dance for me.”

Posted by Indumati Raman at 07:01 No comments: