Ancient temples in Bharat, in the southern regions of magnificent country, are evidence of the high levels of artistry, spirituality and science which mark or history. The spirituality and religious fervour of the Hindu kings that ruled was the reason why we have these gopurams, sculptures, carvings with thousand pillared halls. These structures stand today and inspires us as it did our saints and poets who sang their praises.
On a two-day historical tour to Thanjavur, Mannargudi and Mahadevapattinam with Mystic Palmyra, conducted by historian Pradeep Chakravarthy, I was filled with gratitude and wonder. Gratitude that I could see a thousand-year-old Brihadeeswara temple today and wonder at the passion and devotion behind the vision. As a schoolgirl, skipping behind my father, then as a Bharata Natyam dancer, later as a patron of Bhagavata mela, and now as an author of a book on Thanjavur, I have made over twenty trips here and every time, this temple never fails to impresses me with a different perspective. In this blog I will share information some of which I had only read about and never seen, and some I was not aware. 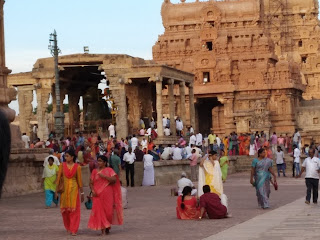 According to my calendar, Raja Raja Cholan’s birth anniversary falls on October 20. (947- 1014 CE) So many legends surround this temple. The Nayaks and the Marathas enhanced the structure and today we see a temple complex with generous contributions from all of them. The front gopuram is built by the Marathas, as is the temple for Vinayaka. A Vinayaka idol consecrated by Raja Raja is seen in a small shrine behind the temple.
It was thrilling to be in the temple that day as it was Pradosham. We were allowed into the garbha graham for darshanam, thrilled to be within two feet of the Siva Lingam during archana. Unforgettable moments. 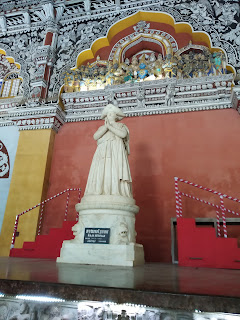 The evening procession of the Utsava murti around the temple was accompanied by drums. We stayed back till 8.30 that night for Palli Arai Sevai. This is the last rite of the day when Siva enters the bedchamber of Devi. After Devi’s aarathi is done, She is taken inside the bedchamber in a palanquin and the doors close instantly. It is all over in minutes but what a beautiful experience.
Mannargudi Rajagopalaswami temple is vast. Again, we had excellent darshanam. An extra bonus was to be able to hold the golden infant Krishna for a second and pray for a fulfilment of a desire. The priest joked that as in real life, you gift a small amount when you visit a new-born, here too, that we must gift the infant some currency, which we all gladly did. 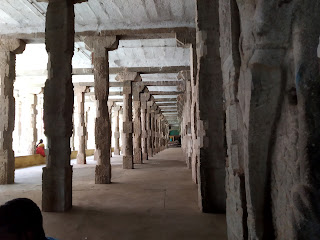 A many pillared hall inside the temple. 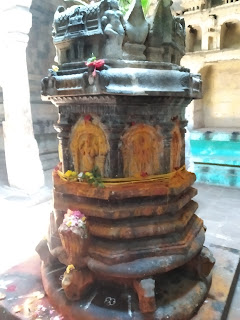 A Tulsi Brindavan inside had carvings and stood on a tortoise pedestal. Elephant heads were seen around the lower level.

Mahadevapattinam was an eye opener. We visited Raja Gori, the memorial shrines of Maratha Kings. They are cremated here, and a shrine is built in that location. 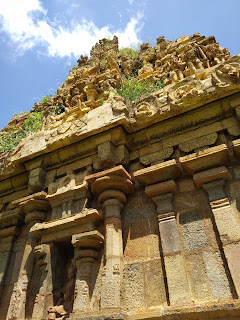 A Siva Lingam is installed for kings and a Devi idol is built for the queens. There were a few dilapidated shrines scattered around the place.
My heart bled to see the state of these shrines which were not only important for history, but also a tribute to the lion-hearted Marathas. We do not know whom the shrines belonged. Pradeep pointed out the specially manufactured bricks which were thinner than the conventional one. The structures were made of brick, stucco and lime. Tourists are not aware of this place and therefore there is no maintenance. 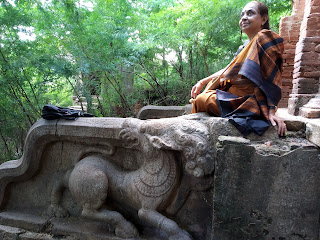 The last Maratha King Shivaji II (1855) had a better shrine.

The fort and Varaha temple built by Tulaja I who wrote the yakshaganam Sivakama Sundari Parinaya Natakam is situated here. No one visits here anymore. Many structures were gone and in its place is a coconut orchard. 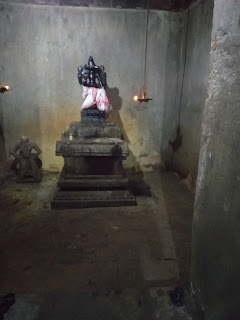 The Maratha Rajas were devoted to both Siva and Vishnu. They worshipped both and that is how Tulaja built the Varaha temple. It is very small, and the idol is also about three feet only. It is in ruins now, though a priest was at the shrine and performed aarathi. The walls of the fort still exist. 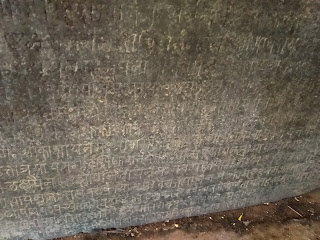 A slab of stone with carvings on one side and an inscription on the other continues to be part of the daily worship.

We proceeded to Orathanadu where one of the many chathrams built by the Marathas still exist. I have read about the chathrams, written about them but I never in my wildest dream imagined I would actually be able to visit the Muktambal Chathram. 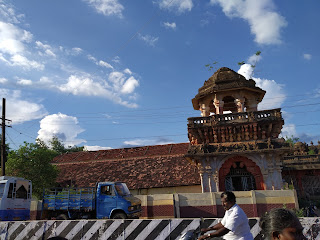 These Chathrams are rest houses for pilgrims and doubles as a school and medical facility when required. Food was served to the tired pilgrims who would then proceed on their journey when they wanted to. Serfoji built this Chathram for his queen in the form of a chariot. 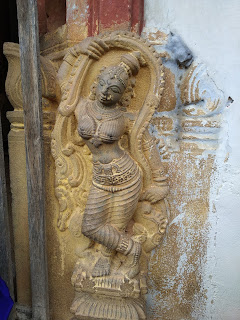 It has beautiful carvings on the walls, and we can see the wheels (though half submerged in the ground), the elephants and the charioteers. It is in a state of sheer neglect. Why can the authorities not clean the premises and clear the bushes around it? 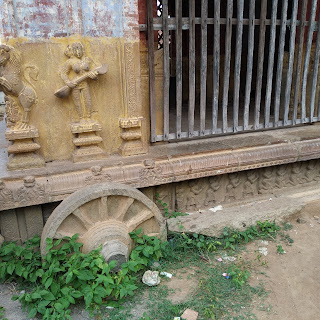 One trip some of us missed (because of traffic regulations) was the visit to the largest iron canon in the world, which has not rusted or deteriorated after centuries.

It was a trip well worth it for me as it is relevant to my current interest in the history of Maratha Kings. Efficiently organised by Priya Thiagarajan, and with a bus full of friendly, knowledgeable and enthusiastic guests, a tour with Pradeep is a must for all those who seriously want to learn about our heritage.
Photos by the author.
#MysticPalmyra, #PradeepCharavarthy, #PriyaThiagarajan, #ThanjavurACulturalHistory

Posted by Indumati Raman at 05:04 No comments: