This historic city with national treasures like the Brihadeeswara Temple, Thanjavur Palace and the Saraswati Mahal Library looks less cared for than what I remember from my visits earlier. A feeling of pride, awe and amazement would overcome me as I stepped inside.

Visitors pay a small sum of Rs. fifty to enter the premises. The staff sitting at the entrance have neither interest nor knowledge about the importance of the artefacts. These centuries-old structures need maintenance and regular repair. A person was whizzing around the corridor inside on his motor-bike, the vibrations of which may cause cracks on the walls of the palace. 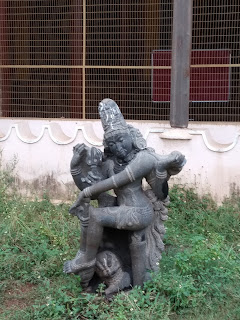 Dwarapalaka idol
This beautiful idol of a Nandi and Dwarapalaka is placed in the ‘lawns’ of the Durbar Hall. Crows use them as their perch. They must be cleaned periodically.
The Darbar Hall in all its dilapidated glory is impressive despite the vanishing and discoloured murals. It is painful to see the graffiti scrawled on the ancient pillars. There is no security staff guarding the statues and bronzes displayed near the Durbar Hall. 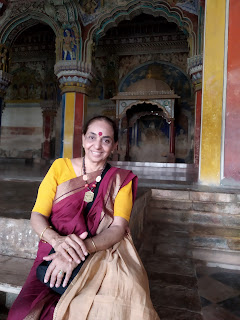 In front of the Durbar Hall 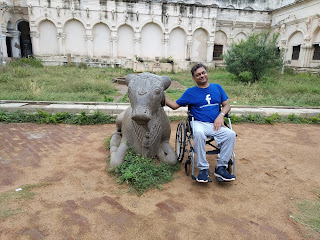 The Nandi
Many Indian and foreign tourists visit the palace every day. The restrooms which charge two rupees have poor drainage, are wet and dirty. 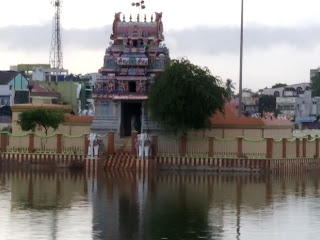 The temple in the centre of the Kamala layam temple tank

Thiruvarur’s magnificent temple and the perennial waters of the Kamalayam tank are a breath-taking sight. Commercial development has transformed this small town into one bustling with activity.

There are several references about this temple in my book Bhagavata Mela My Tryst with Tradition. The Trinity of Carnatic music, Tyagaraja, Muthuswami Dikshitar and Syama Sastri were born in this town. The temple and the deity Tyagesa inspired many composers to sing of its beauty and divinity. 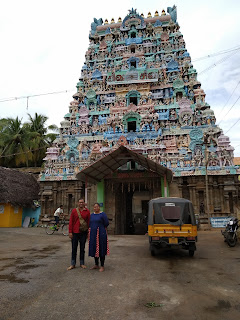 This city is famous for the Panchanadiswara temple and the samadhi of the saint poet Tyagaraja. The Kaveri flows in regal splendour and was in full force when we visited. 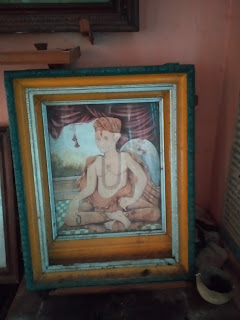 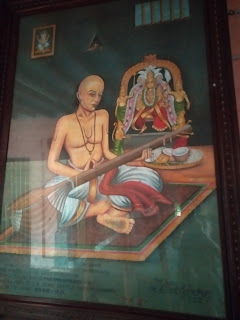 This place has a special nostalgic note for me. In January 1997, our family sponsored two Bhagavata Mela natakams by the Natya Vidya Sangam to be performed here inside the holy precincts of the Panchanadiswara temple. This was the first time such permission was given. Five thousand devotees gathered each day. The occasion was the 150th Aradhana of Tyagaraja, whose family belonged to the tradition. Tyagaraja himself wrote two Bhagavata Mela natakams. 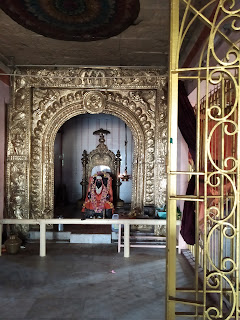 The shrine at the samadhi is now glitters with gold leaf covering in contrast to the bare one in 1989 when I first visited this place. I had visited both the temple cities and Tirupati to pay homage to the great composer before my debut of “Sumathi Tyagaraja”, an Ekaharya presentation based on his kritis. 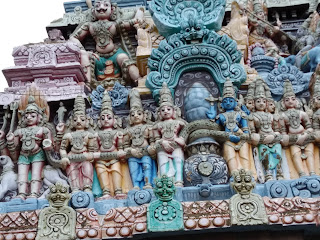 Detail from the Gopuram
Posted by Indumati Raman at 22:16 No comments:


The first week of October had some wonderful moments when I re-visited Thanjavur, Thiruvaiyaru and Thiruvarur temples with my family. For my daughter Ruupa and son-in-law Bhuvnesh it was a rewarding experience as they had read in great detail about these temples when they edited my book Bhagavata Mela My Tryst with Tradition. Ranjan and Ruupa have accompanied me to Melattur as  children many times. She was the Convenor of the 2002 Festival in Mumbai. Bhuvnesh was appreciated for his performance as Sutradhar and adorns the book-cover. 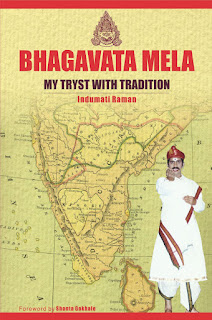 In my book, I have included stories surrounding these temples, the rulers, saints, poets and dancers. The temples with their awesome dimensions and centuries of history are humbling that I feel to set foot on this sacred land is a blessing.

It was a nostalgic drive from Thanjavur through the Melattur ‘village’ that morning. I was last there on my annual visit in 1998. At that time, I did not know that it would be my last visit. After a meeting with the artistes and musicians, we planned to start work on the Marathi Natakam ‘Sakuntala’. It was slated to be a four-day festival and I was busy organising funds, designing costumes, and publicity efforts. There was music to be composed, actors to be trained and a hundred other tasks. You can read in great detail about all that in my book.
When I re-visited Melattur incognito last week, I had only a vague memory of the village.
Two things that struck me was that the distance seemed so much longer, and the roads were not mud but perfectly tarred roads. On either side were green fields. Kaveri’s tributaries and creeks appeared every few miles, refreshing the eye and mind. It was Guru Peyarchi on October 4th   and the Thittai temple, which is on the route, was bustling with crowds. A hundred cars lined the roads. There was heavy security as many prominent persons were expected to attend the special pujas.
I did not have a clue as to the directions, everything is so different. Melattur is no longer a small three-street hamlet but a town with new buildings, shops, garishly renovated heritage homes and many locked doors. Some houses are in ramshackle condition, but late Balu Bhagavatar ’s house next to the temple has been renovated.
I could not locate the open grounds where the annual festival used to be held. I had heard last year
that a permanent stage has been built now in place of the temporary wooden stage that were put up in the nineties.
Although we were there much before the day closing time, there was a lock on the temple door. From the outside everything seemed same. The gurukul (priest) was persuaded to open the doors for us and he very kindly asked his relative to show us around. 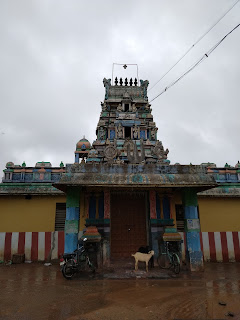 A surprising sight awaited me inside. The small temple is now completely re-built. The outside prakarams which were open to the sky are enclosed resulting in a vast hall.  The processional vehicles like Garuda are lined up inside.
There are separate shrines for Varadaraja Perumal, Sri Narasimhaswami, Vinayagar and Hanuman. The two granite Narasimha Swamy idols which were in garbha graham earlier, do not have a special shrine built for them. 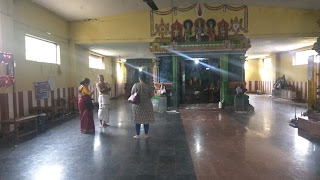 Interior of the Melattur temple. 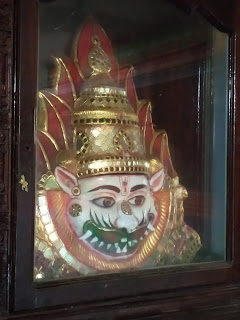 The Mask in a separate glass case outside (2018)

It was disappointing to note that the mask of Narasimhaswami which is used for the performance of ‘Prahlada Charitram’, is now enclosed in a new glass case and placed outside, deprived of its sacred space inside the sanctum sanctorum.
I wonder if the divine energy that the mask had been infused with for three centuries of worship in the sanctum sanctorum would have depleted by now.
It is definitely heartening to see the improvements and additions made to the temple and the village.  Bhagavata Mela is today a well-known art-form and the festival attracts visitors from all over the country and abroad. It speaks well of the united efforts of the natives of Melattur who must have contributed in cash and kind.he renovation will make a good impression on visitors.

Posted by Indumati Raman at 00:45 No comments:


A nostalgic trip down South to the land of my ancestors has left me with a feeling of bliss. There is a great positive vibration in the prosperous city which has burgeoned into a commercial hub of this district. I feel blessed to be born to T.S. Swaminathan and Padma, parents who have lived the most amazing hundred years on this earth. My mother, aged 101 years, is the last surviving child of FGN, F.G. Natesa Iyer. He was a patron of musicians and father of Modern Tamil Theatre. Here is an excerpt from my book Bhagavata Mela My Tryst with Tradition. 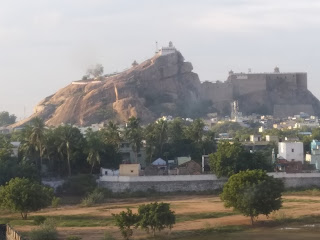 The Malaikottai or Rockfort Vinayagar Temple 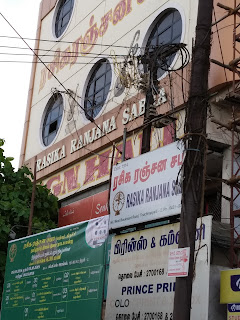 “My maternal grandfather F. G. Natesa Iyer (1880-1963) was a colossus in the field of theatre and a patron of music. A Shakespearean actor famed for his roles as Othello, Hamlet and King Lear, he later opened his own company and staged historical and mythological dramas. He would sing popular classical music compositions as his entry song or when suitable in the story. He held posts like elected Mayor of the city, District Traffic Superintendent of Railways, and leader of the Indian National Congress of this region. Many musicians, actors and artistes received encouragement from him and even after they achieved fame and name, they held our family in great affection. His achievements in theatre earned him the title Father of Modern Tamil Theatre.” 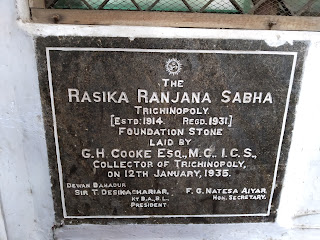 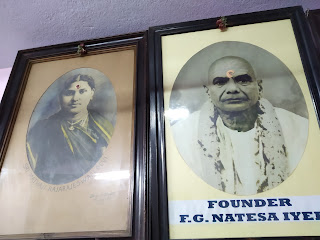 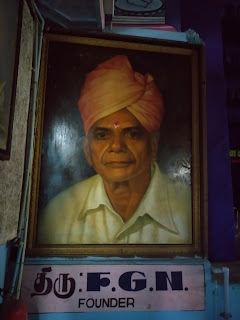 The Auditorium is named FGN after its Founder


“They would be welcomed at our home for meals and would happily recount many incidents when FGN played an important role in their lives. Bharat Ratna M. S. Subbulakshmi, acted in many films, and had her debut in the film Seva Sadan opposite FGN.  She told us of the time when FGN had to slap her in a scene. After much hesitation, he agreed to enact the scene. Her young daughter Radha who was present began to cry inconsolably. Palghat Mani Iyer told us of the concert where he, as a young boy, was accompanying a musical giant on mridangam. The musician sang a complicated Pallavi and kept his hand under his angavastram (upper cloth) so that Iyer could not follow the Tala. FGN stood up in the midst of the concert and reprimanded the musician. “The boy can accompany you only if you let him see your hand,” he said sternly. FGN’s grandfather was Tyagaraja Sastri, a composer of merit and a contemporary of the famous saint-poet of the same name.” 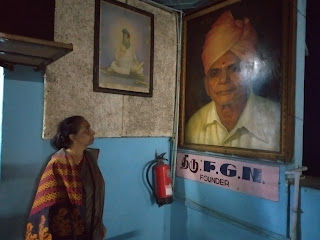 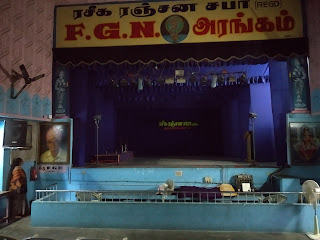 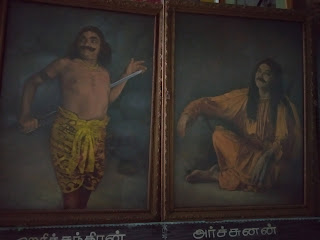 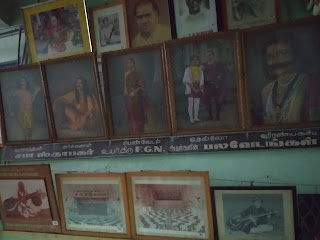 A pioneer of theatre in the South, FGN made his debut in theatre as Goddess Saraswati in a play. His play, ‘Gyanasundari’ achieved great popularity. He had a powerful personality and a tall athletic body, and excelled in roles like Manohara, Raja Harishchandra, and Shakespeare’s Hamlet and Othello. Music was an essential aspect in the dramas of those days and FGN was an expert singer. He was also adept in the rare musical instrument called the Swarbat. FGN was an orator in English and Tamil. As journalist and art critic he contributed under his pen name ‘Hamsa’.
A patron of theatre and music, he established the first formal sabha, ‘Rasika Ranjana Sabha’ in Tiruchirapalli.”

(It was this Sabha that we visited last week (October 2018). The auditorium is named after FGN.)

Posted by Indumati Raman at 09:02 No comments: